The television journalist who towers head and shoulders above the... worst

He was just asking to be sacked: 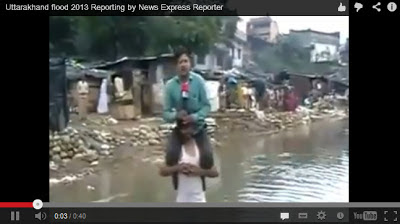 And sacked he was:

FROM THE NEWS EXPRESS WEBSITE: "News Express Channel did not broadcast this video of Mr. Narayan Pargaien but it was uploaded by someone we don’t know, Mr. Pargaien was working as a Retainer with designation of a Reporter and on Tuesday (25-06-2013) This Channel terminated Mr. Pargaien with immediate effect, as such an act by the reporter is a Grave misconduct which goes against cultural values of our Channel."


But Mr Narayan Pargaien, who was reporting from Dehradun on the Uttarakhand flood disaster, is trying to defend the indefensible. He told the Indian Express:

"They [the locals] forced me to ride on the shoulder of a local. They told me they won't allow me to cross the river on my own," he said, adding that he could not refuse them.


What was he thinking?