It feels as though I have unearthed a gold mine and discovered a time machine at the same time: When reading a book becomes an experience of a lifetime

History, be it fact or fiction (!), fascinates me. One of my all-time favourite books is Travels with Herodotus, by the legendary Polish journalist Ryszard Kapuscinski. I have also enjoyed the sagas written by James Michener and James Clavell. And every now and then I dip into I Wish I'd Been There: Twenty Historians Revisit Key Moments in History.

So how could I not order A History of the World in 100 Objects from Flipkart after I first chanced upon the book at a Reliance TimeOut store? (It's called "showrooming", Reliance. Get used to it.)

For more than a fortnight now, whenever I have had the time, I have been obsessively reading up on each of the historical objects described intelligently and — yes — lovingly by Neil MacGregor, director of the British Museum.

A History of the World in 100 Objects, which is based on the BBC Radio 4 programme of the same name, is such a treat that I find myself re-reading almost every chapter.

---
DON'T TAKE MY WORD FOR IT
"This wonderful book transports us to every corner of the globe." — TOM HOLLAND, OBSERVER
---

And, after I am done with each chapter — I am a quarter of the way through the book, object by object, one object to a chapter — I head over to the BBC site dedicated to the programme. Here I can listen to the original radio programme, go through the transcript, examine the selected object in glorious colour, read additional comments by experts, study relevant timelines... it feels as though I have unearthed a gold mine and discovered a time machine at the same time. 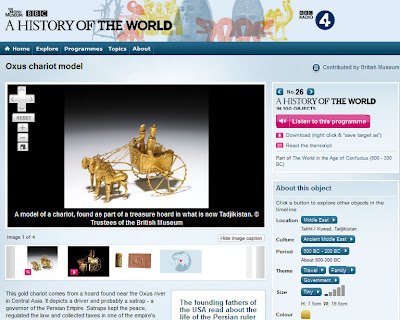 ---
DON'T TAKE MY WORD FOR IT
"Vivid and witty, shining with insights, connections, shocks, and delights." — GILLIAN REYNOLDS, DAILY TELEGRAPH
---

From beginning to middle to end, each chapter fairly radiates energy. Neil MacGregor tells the story in so vivid a style that I keep asking myself: How does he do it?

And, this is perhaps just as important, he has to make it interesting for the reader from first word to last.

---
DON'T TAKE MY WORD FOR IT
"One can only remain grateful to Neil MacGregor for inviting us, his readers, on this wonderful journey." — RUDRANGSHU MUKHERJEE, THE TELEGRAPH, KOLKATA
---

Let us take, at random, a few opening lines (not the entire first paragraph):

OLDUVAI STONE CHOPPING TOOL (1.8-2 MILLION YEARS OLD): "This chopping tool is one of the earliest things that humans ever consciously made, and holding it puts us directly in touch with those who made it."

OLDUVAI HANDAXE (1.2-1.4 MILLION YEARS OLD): "What do you take with you when you travel? Most of us would embark on a long list that begins with a toothbrush and ends with excess baggage."

CLOVIS SPEAR POINT (11000 BC): "Imagine. You're in a green landscape studded with trees and bushes. You're working in a team of hunters quietly stalking a herd of mammoths. One of the mammoths, you hope, is going to be your supper."

PARACAS TEXTILE (300-200 BC): "Looking at clothes is a key part of any serious look at history. But, as we all know to our cost, clothes don't last — they wear out, they fall apart, and what survives gets eaten by the moths. Compared with stone, pottery, or metal, clothes are pretty well non-starters in a history of the world told through 'things'."


There is plenty to learn, too. An arbitrary example:

LACHISH RELIEFS (700-692 BC): The strategy of shifting populations has been a constant phenomenon of empire ever since [the time of King Sennacherib, the Assyrian ruler]. Perhaps our nearest equivalent — just about in living memory — is Stalin's deportation of peoples during the 1930s. Like Sennacherib, Stalin knew the value of moving rebellious peoples out of strategic areas and relocating them far away from their homelands.


And here's the concluding paragraph from the same chapter:

Sennacherib was not quite as bad as Stalin. Cold comfort for the victims. The Lachish Reliefs show the misery that defeat in war always entails, though of course their main focus is ... Sennacherib in his moment of triumph. They do not record Sennacherib's less than glorious end — assassinated by two of his sons while he was at prayer to the gods who had appointed him ruler. He was succeeded by another son, whose own son, in his turn, conquered Egypt and defeated the pharaoh Taharqo, who is the subject of the next chapter. The cycle of war that Lachish Reliefs show — brutal, pitiless, and devastating for the civilian population — was about to begin all over again.


Oh joy! I have waiting for me another 75 chapters bursting with such scintillating writing.

---
DON'T TAKE MY WORD FOR IT
Mary Beard reviews A History of the World in 100 Objects in The Guardian: "Brilliant on radio, Neil MacGregor's 100 objects also make a marvellous book".
Posted by Ramesh Prabhu