What happens when a crusty old journalism teacher takes on Gen-Y?


The reactions came in almost as soon as people received the link via e-mail.

Here's what my 60-year-old brother-in-law, Praful Patel, who lives in England, had to say:

I can empathise with Gen-Y, so do agree with most of their comments.

The one that I would disagree with is the traffic behaviour. They do have  a choice of setting out earlier so that they can minimise risk to themselves along the way.  Yes — everyone is young once — but we all want to be able to look back and say that!


***
And here's the response of a twentysomething management professional, Ankita Maurya, who lives in the U.S. (she is the daughter of a good friend):

You sure are tough on them! Millenials/Gen-Y are getting a really bad rap these days... in the US and in India, too, by the looks of it... a lot of the criticisms are true... but I just think our priorities are shifting... we have seen our parents go through the grind... we are now trying to figure out how to not do that and work smarter!

***
My 14-year-old nephew, Vinay Pai, with whom I play squash, echoed Ankita's sentiments. "Your accusations are too harsh," he told me. :-)


***
And senior media professional Pratibha Umashankar had this to say:


***
AND THE COMMENTS KEPT COMING:

Well, you succeed in holding the interest of youngsters, which is fantastic!

About Point #1, the Internet has loads of stuff by people who mistakenly think they are journalists, and then you have impressionable minds (can’t generalise, though, because there are also the discerning), who take almost everything that’s published there as gospel. Sifting through is an important skill, but what is the baseline? Also, the Internet is filled with a mish-mash of opinion that is passed off as news.


***
Great comebacks, except for No 13. Guilty as charged! Love your students.

I just might steal this idea; in fact, I am wondering if I can actually do that and give Commits the credit. Let me know. If yes, you will have to send the text in Word format. 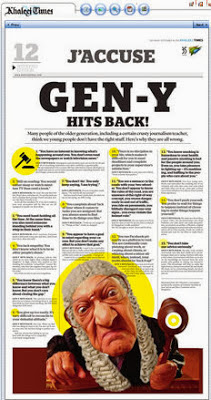 Fun feature! Who asked us to score higher than Lakshmi aunty's daughter, indeed! However, in solidarity with people of a certain age, I never asked my kids to match the scores of other kids so long as they were achieving their potential and I don't know any crusty journalism teacher. Do you??

Thanks! Interesting read. The Gen-Y answers do come across as a bit rude and cynical. I wonder if it's the Buddha himself because he or she seems to have understood everything of the human condition and world matters, not just of what relates to this generation, but even the previous ones. And not even one instance of "You're right, and I agree, and this is what we can do to co-operate to achieve betterment together." Which is a bit sad.

There is some cynical anger there, which is fine I guess. It does define this generation. Including me, as you can read ;)

***
COMMITS ALUMNI ALSO WEIGHED IN (NOT ALL COMMENTS WERE COMPLIMENTARY, THOUGH):
Reading The Chronicle cover story I couldn't help but smile. It reminded me of how I used to think even a couple of years ago. But as you evolve in your career and your personal life you learn to distinguish between the idealist answer and what really works for you.

What struck me was the career-goal bit. You will be stretched at work, you will be pushed against the wall sometimes, and you will want to be in a position when you listened even half-heartedly to those who have more years to you on possible situations you will encounter along the way.

If you are to deliver a presentation at the end of the day, your boss will not be interested to know about all the ad hoc work you were given through the day. If you have a wide range of projects that don't hold your interest, complete those projects anyway. You never know when you will need to step up to do that same job you absolutely detested in college. And I assure you there will be many times like that.

The workplace of today is evolving at a rapid rate. Though there is value for people who have defined skill-sets, there is greater value for people who are equipped with multiple skills. If you want to be a copywriter, you should know how print, television, social media, and digital media function. This is applicable to all disciplines in media.

As for sucking it up, I groaned every time I heard the phrase. I groan even today. Only difference is, I know that it is a reality that isn't nice, but, a reality nonetheless. The world doesn't stop if you're unwell, or if you have suffered a personal tragedy. Neither does business.

And as for advice, I am all for learning the hard way, but a little flag-off from time to time never hurt. :)


***
I am wondering, how did you let that pass under your nose?

The copy's rudeness is quite appalling, but I'm sure your "accusations" won't change a bit in spite of all that rudeness.

What's the point then, may I ask?


***
Fun read, but I am not sure if I would have accepted this as the lead of The Chronicle.

This could be in another designated section. No?

About the answers to your accusations... the cycle goes on. Not all accusations are correct, neither are all answers!


***
Wow! What a way to lighten my Tuesday brain. I have saved the link in my drafts folder. The next time my dad lashes out at us with his favourite emotional dialogue, I know where to fetch my answers from. Thoroughly enjoyed reading it, Ramesh Sir. :) 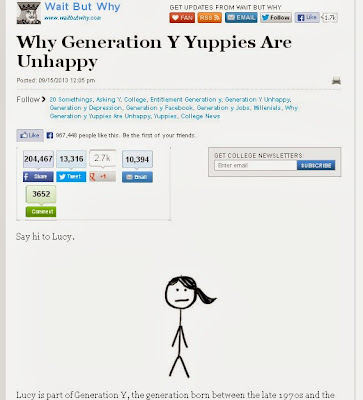 I was especially struck by the soundness of this comment:"Gen Y has 'unrealistic expectations and a strong resistance toward accepting negative feedback,' and 'an inflated view of oneself.'"[Paul Harvey, a University of New Hampshire professor] says that 'a great source of frustration for people with a strong sense of entitlement is unmet expectations. They often feel entitled to a level of respect and rewards that aren't in line with their actual ability and effort levels, and so they might not get the level of respect and rewards they are expecting."


And I also wrote that I agree 100% with the advice provided at the end of the article:

1) Stay wildly ambitious. The current world is bubbling with opportunity for an ambitious person to find flowery, fulfilling success. The specific direction may be unclear, but it'll work itself out — just dive in somewhere.

2) Stop thinking that you're special. The fact is, right now, you're not special. You're another completely inexperienced young person who doesn't have all that much to offer yet. You can become special by working really hard for a long time.

3) Ignore everyone else. Other people's grass seeming greener is no new concept, but in today's image crafting world, other people's grass looks like a glorious meadow. The truth is that everyone else is just as indecisive, self-doubting, and frustrated as you are, and if you just do your thing, you'll never have any reason to envy others.

Afterwards, I wrote to some young people I know, asking them if they thought that this advice is helpful for those who are about to begin a career.

Here is the response I received from Ankita Maurya's younger sister, Shweta, who is a college student in the U.S.:

Ankita and I were just talking about this article a few days ago! I think the first two points are meaningful to me. Just because reality does not meet my expectations doesn't mean I should lessen my ambitions — I still want to aim high!

But the reality of not being as special as we think is important — I know that my friends and I have left school with inflated images of how unique each of us are. It's not just that we think we are unique, but we think that we can skip hard work and immediately obtain our dreams once the world learns about our uniqueness — as if these things will be handed to us because we are as special as we believe.

The second point is a good reminder that we must still earn our place in the world and at work and leads back to the first point: stay ambitious.


And there were comments by Commits students, too.
That was some pretty awesome advice! Especially, "to dive in somewhere."
Just what I needed to hear today!

Thank you. As always. :)
I agree with the second point. You are not special; you have to work and gain experience to be special! :)
Posted by Ramesh Prabhu