Do you have what it takes to be a restaurant critic? 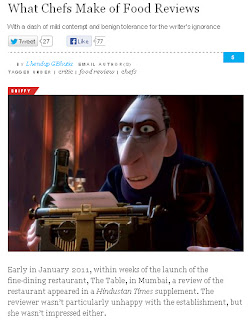 What is a chef to think when a leading newspaper's restaurant critic, in her review, heaps praise on his rawas (salmon) preparation when the dish in question was chicken wings? Can you blame the chef for thinking there is something fishy about this particular reviewer? Wouldn't he then also question the credibility of the newspaper that sent her on this assignment?

This rawas-chicken wings gaffe is just one of the many sticking points in the relationship between chefs and restaurant critics, Lhendup Bhutia tells us in a recent issue of Open:

Earlier, a few writers reviewed eateries, but now almost every publication or website with a lifestyle section has one such reviewer. Unlike in the West, where food reviewing is a serious job and most writers have a background in culinary arts, here it is very rare to come across a food writer with any such expertise. What’s more, most of them don’t specialise in the subject.

It is not surprising that chefs dislike reviewers. But in India, where a chef’s competence is usually judged by a gaggle of fledgling writers, this dislike is replaced by utter contempt.


Read Bhutia's enlightening piece in its entirety here: "What Chefs Make of Food Reviews". Be warned, though: You may never again take a restaurant review in an Indian publication seriously. Worse, you may stop reading restaurant reviews.

The problem appears to be the lack of expertise on the part of restaurant critics in our country. Of course, there are exceptions, such as the food reviews in Time Out Bengaluru, which come accompanied by the claim, "The best food and drink in Bangalore, reviewed anonymously by experts". 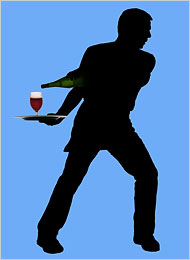 But is there any food critic in India whose fame and prowess is on par with that of Frank Bruni, the New York Times legend? Of course, Bruni was a seasoned (no pun intended) journalist before he was appointed the newspaper's restaurant critic in April 2004 (he moved to the Op-Ed page as a columnist in June 2011). His background in journalism surely contributed to his approach — and success — as a food reviewer.

Some time ago, Bruni answered a couple of questions from readers on why he gave up conventional reporting and took up the position of restaurant critic. His response is so illuminating:

Q. Until reading the section on your background connected with "Talk to the Newsroom," I had not realised what an extensive background you had in journalism. I was wondering 1) why you chose to become a restaurant critic and give up your involvement in day-to-day news reporting and 2) do you miss being a more conventional reporter?

— Kenneth Astrin
Q. I've read your articles in The Detroit Free Press and The New York Times since the early '90s, and have always admired your work. With all respect, I can't understand why you are now doing restaurant reviews. It's honest work, but it seems frivolous.

— James Gerardi
A. Restaurant criticism was a new challenge and new adventure that came along at a time when I was almost ready for both. I say “almost” because I would have loved to have spent another 12 to 18 months as the newspaper’s Rome correspondent, but the critic’s job came open when it came open, just under two years into my Rome assignment.

Frivolous? I understand why it might be seen that way, but I myself don’t see it that way at all.

Food in general, including restaurant food, is an object of ever greater attention from ever larger numbers of people.

Restaurants often serve as handy mirrors of a neighborhood or a city or a moment in time. They reflect people’s passions and foibles and vanities.

So acting as a guide through the restaurant world and writing dispatches from it strike me as meaningful work.

At times I indeed miss what you call “conventional reporting.” There’s a very particular satisfaction in gathering information, in picking up the phone or hitting the road and, chalk mark by chalk mark, filling in what was a blank blackboard.

But I get to do some of that in the restaurant-related articles I write beyond reviews, and even reviews themselves incorporate more "conventional reporting" — or at least reporting — than you’d think.

They pivot, as all reporting does, on close observation and on making sense of a certain experience, a certain small patch of the world.


What an insightful piece of writing this is! In nine paragraphs we get the essence of what it means to be a restaurant critic. Read the entire Q&A with Frank Bruni here. You will savour some delectable tidbits in the form of Bruni's replies to questions on topics such as the reactions of chefs to his reviews, and the music and noise in restaurants. He also addresses the very important subject of anonymity, and tackles firmly this question asked by a reader in Montreal: "What do you say to chefs who feel a critic without having worked in a restaurant or studied in a culinary environment, should not be a restaurant critic?"

For dessert, sample the restaurant review by Frank Bruni that prompted the owner to take out a full-page ad in the New York Times in protest against the review. (You will also want to read this trenchant post on the inappropriateness of the ad by former NYT restaurant critic Mimi Sheraton in Slate: "Restaurateur bites critic". And you must, absolutely must, read the New Yorker take on the restaurateur-critic face-off: "Kobe Beef". That's a great headline, too!)

Now there is only one question that begs an answer: What would happen if restaurateurs in India were to emulate the American restaurant owner?
Experience in journalism is an advantage if you want to be a restaurant critic

SAUMYA IYER (Class of 2014), a foodie whose wish is to be a food writer and who is currently an intern with Bangalore Mirror, commented via e-mail:
I think you at least need to be an experienced journalist with knowledge about the food industry in order to write about it. One of my favourite food critics, Marina O’Loughlin, absolutely loves restaurants. That passion speaks to me through her writing; not only is she experienced in the field of journalism but she is also very well versed with the nuances of food and the thought that goes into making a particular dish.

I also agree that a reviewer must remain anonymous at all costs because having the chef and staff give you special attention when they should be going about their own business is not how a reviewer can soak up the real flavours of the place.

As for amateur food writers, there are so many bloggers and Facebook groups like “Foodies in Bangalore”, that it got me thinking: just because you love eating food, does that make you an expert? I also spoke to one of the city’s famous chefs about this, and he told me that there’s nothing you can really do about it and that opinions are like a**holes, everyone’s got one.