Mint shows the way by not kowtowing to advertisers

As far as I know, Mint is the only publication in India that makes it a point to not genuflect before advertisers. For Mint, readers come first, not advertisers. Which is as it should be.

Some well-meaning people may argue that newspapers and magazines will die if advertisers pull out. True, advertising revenue plays a huge role in the financial health of both print and electronic media, but I believe that it is a good editorial product that attracts readers and viewers in the first place, which then helps to draw advertisers. Which is as it should be, but is often not.

Back to Mint and its stringent policy with regard to advertisers. On October 13, the newspaper distributed a four-page supplement on the royal wedding in Bhutan along with the main section. This supplement was clearly labelled "Mint Media Marketing Initiative". Even so, the editor published this note on Page 1 of the main newspaper: 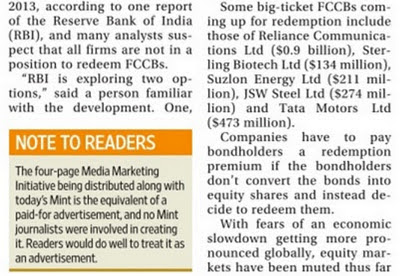 This is the first time I am reading such a note in an Indian publication. All credit to Mint editor R. Sukumar for taking a bold stand at a time when the line between editorial and advertising appears to be fast blurring (read "Paid news and the influence of newspaper owners").

Why did Sukumar feel the need to write that note? He explains in his regular column in Mint:


A Media Marketing Initiative [MMI] is essentially an advertorial, but both advertisers and publishing firms prefer more ambiguous terms. MMI is one such. Then there are others including special feature, special report, and the like. Some publishing companies prefer to use their own coinages — the India Today Group used to prefer the term Impact Feature when I worked there (I have no idea what it uses now because I don’t read any of its magazines); and the Outlook group uses Spotlight. Then, there are other publishing firms that choose not to say anything at all, leaving it to the reader to figure out whether a report on Sudan or Russia is an editorial feature, advertorial, or, still worse, a paid-for editorial write-up.


Sukumar also explains later in his column that, apart from warning readers, he also hopes that this message "will dissuade at least some advertisers from asking for advertorials in Mint, and some basic reporting and research I have done over the past few days makes me believe they will".

All journalists, and media students, will do well to read Sukumar's column in its entirety: "The inviolable line".