A good illustration is sometimes more effective than a photograph. That is why when Rachna Prabhu (Class of 2008) was a student at Commits, the college newspaper featured her work regularly.

Rachna also provided caricatures (see below) of the speakers — to accompany our students' audiovisual speaker introductions — at the Hard Sell seminar organised by Commits in Bangalore in January 2007. It became a tradition afterwards to have students include sketches of the speakers at every Commits seminar. 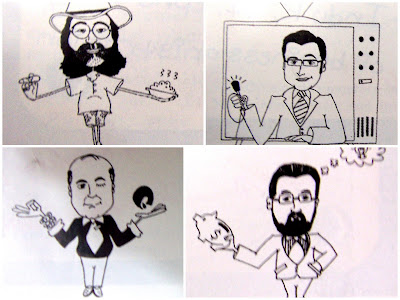 Rachna, who says she has been "doodling in schoolbooks, paper napkins, other people's important files, on walls, and on unsuspecting people's faces pretty much since I was a five-year-old", is now a full-time children's book illustrator. Recently, after she illustrated a book on entrepreneurship, Entrepedia, written by Prof. Nandini Vaidyanathan, I conducted an email interview with her to learn more about her work:

Medini [Prof. Vaidyanathan's daughter and Rachna's Commits classmate] got in touch with me and asked me if I'd like to illustrate Nandini Ma'am's book on entrepreneurship. I was ecstatic because this was the first book I'd be illustrating that wasn't a children's book. I had to follow the normal procedure of sending across a sample illustration that was then first approved by Nandini Ma'am and then the publisher, Embassy Books. Once I had discussed the project details and commercial aspects with the publisher, I got to work on my first gray-scale, non-kiddy book which turned out to be my favourite project thus far. Here's why...

With children's book publishers, they send you a tabulated list of illustrations needed for the story, including the character's expression, clothes, background description, and sometimes even their body structure! This limits your freedom as an illustrator.

With Entrepedia, Nandini Ma'am and the publisher gave me the complete freedom to illustrate the book any way I wanted to. I was just provided with all the chapters and from thereon it was just about me sending across the final illustrations as and when they were ready. The conceptualisation process for Entrepedia was my favourite part of the project. 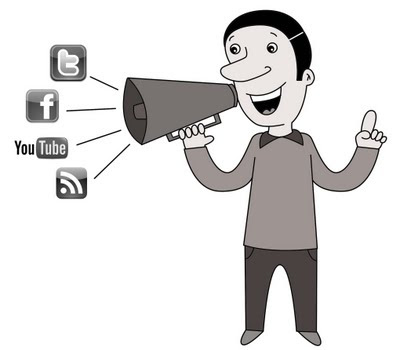 Nandini Ma'am and Medini told me that they wanted illustrations that looked cartoony yet grown-up. The first illustration for the book took me longer than I thought because I was venturing into new territory with these illustrations but after the first one, the others came easy. I wanted to stick to my drawing style, even if it was for a business book, and so I added the round eyes and big noses.

The ideas behind each illustration was different from the other. For instance, in the chapter about 'Where to look for ideas', I drew three men of various age groups looking in all directions through binoculars and a magnifying glass with the light bulbs floating right near them, just waiting to be spotted. In other words, there are ideas everywhere, you just need to find them.

Similarly, in another chapter that was about Business Incubators, I illustrated with an entrepreneur emerging out of an egg (egg=incubator). All in all, it was good fun deciding what to draw for each chapter, especially when there were no limitations.
I am very comfortable with Photoshop and I used it to do all my illustrations. I plan to learn Adobe Illustrator soon.
I could complete just one illustration a day as I'd allocated only three hours a day for each illustration. I completed the project within a month.
UPDATE (December 9, 2011): Rachna has just begun drawing cartoon strips as a contributor to the Coolest Job campaign page. "The comic strip looks at the light side of life in the corporate world. Here's the first (see below) of many more to come... :)," she wrote on Facebook today.

Rachna is now, as she describes herself, the owner, designer, and "do-it-aller" of Doodle Doo, an online store for illustrated goodies. Check out the store here.