It all depends on the telling, sure. But surely who does the telling matters?

Last month, at a sale in Landmark, I picked up a delightful book: Viva La Repartee, subtitled "Clever comebacks and witty retorts from history's great wits and wordsmiths". As you can imagine, it's packed with funny and, often, sarcastic rejoinders so it's a great read. Also, this is a good reference book to have at hand when you're being insulted and want to hit back with a zinger of a remark.

But as a journalist I can't help wonder if ALL the one-liners here were actually uttered by the people to whom they're credited. Sometimes, in an exercise of this sort — collecting ripostes from around the world — mistakes may be made, embellishments may be ignored, exaggerations may go unnoticed. 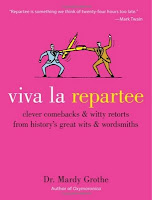 Truman Capote was fond of regaling people with an anecdote about one of his finer moments. At the height of his popularity, he was drinking one evening with friends in a crowded Key West [Florida] bar. Nearby sat a couple, both inebriated. The woman recognized Capote, walked over to his table, and gushingly asked him to autograph a paper napkin. The woman's husband, angry at his wife's display of interest in another man, staggered over to Capote's table and assumed an intimidating position directly in front of the diminutive writer. He then proceeded to unzip his trousers and, in Capote's own words, "hauled out his equipment". As he did this, he bellowed in a drunken slur, "Since you're autographing things, why don't you autograph this?" It was a tense moment, and a hush fell over the room. The silence was a blessing, for it allowed all those within earshot to hear Capote's soft, high-pitched voice deliver the perfect emasculating reply:

"I don't know if I can autograph it, but perhaps I can initial it."


Those who are familiar with Capote's way with words will not find it difficult to believe that he came up with this crack on the spur of the moment.

The only problem is Capote did not make this remark.

Let Capote tell it in his own words in this excerpt from "Remembering Tennessee" in Portraits And Observations: The Essays of Truman Capote (another book that I picked up at the same Landmark sale):

My funniest memory... is of four or five years ago, when I was staying with Tennessee [Williams] in Key West. We were in a terrifically crowded bar — there were probably three hundred people in it, both gays and straights. A husband and wife were sitting at a table in the corner, and they were both quite drunk. She had on a pair of slacks and a halter top, and she approached our table and held out an eyebrow pencil. She wanted me to autograph her belly button.

I just laughed and said, "Oh no. Leave me alone."

"How can you be so cruel?" Tennessee said to me, and as everyone in the place watched, he took the eyebrow pencil and wrote my name around her navel. When she got back to her table, her husband was furious. Before we knew it, he had grabbed the eyebrow pencil out of her hand and walked over to where we were sitting, whereupon he unzipped his pants and pulled out his c*** [I am the one doing the censoring here.] and said — to me — "Since you're autographing everything today, would you mind autographing mine?"

I had never heard a place with three hundred people in it get that quiet. I didn't know what to say — I just looked at him.

Then Tennessee reached up and took the eyebrow pencil out of the stranger's hand. "I don't know that there's room for Truman to autograph it," he said, giving me a wink, "but I'll initial it."

It brought down the house.

The essence of the quip is the same but so much else changed when the episode was included in Viva La Repartee. How could this have happened? Since I can only speculate, I thought it best to ask the author himself and, so, I have posted a comment on Dr Mardy Grothe's website. I am expecting a reply soon.

UPDATE (April 29): Dr Grothe's email was waiting for me when I got to work today:


Thanks for your note, Ramesh. Very interesting, indeed. Check out the following link, in which Capote clearly describes making the remark: Truman Capote: Conversations. So tell me, my friend, what do you make of this? I have one theory, but I'd like to get your thoughts first. Perhaps your students might want to get in on the act as well. Mardy Dr. Mardy Grothe 1921 Bowling Green Trail Raleigh, NC 27613 919-327-1971

Well, I can think of only two explanations.

One, Capote, by the time of this interview, had forgotten the essentials of the episode; perhaps, in his telling and re-telling, he came to believe he had made that crack.

Second, Capote was apparently "unabashed in his pursuit of fame and fortune". So it is likely that, years later, he took Tennessee Williams's crowd-pleasing line and conveniently made it his own.

I am going to forward my theories to Dr Grothe now. I am sure by tomorrow we'll find out what his theory is.

I sent another email to Dr Grothe later in the evening yesterday:

This gets curiouser and curiouser. The link you have provided here is for an interview with Capote that was published in 1980.

When I got home today I looked up my copy of Portraits and Observations, in which Capote's essay on Tennessee has been published. And the year Capote wrote this? 1983. Go figure!


And here's the good doctor's response:


Thanks for both your notes, Ramesh.  Your first one propounded theories similar to my own.  The plot thickens, however, after your second one.  The game's afoot, my friend.  We'll have to continue our sleuthing!

One thing is clear, though: no blame attaches to Dr Mardy Grothe for including in Viva La Repartee this particular Capote version. It's there for all to read in Truman Capote: Conversations.

AN UPDATE (May 1): After reading this blog post Dr Grothe was kind enough to write in appreciation:

Very interesting, Ramesh. You have shared our recent encounter in an intriguing and interesting way with your students and other readers. I will do the same in my weekly e-newsletter ("Dr. Mardy's Quotes of the Week"), which I usually send out late Saturday night or early Sunday morning.

I've taken the liberty of adding you to my mailing list, so you can see it for yourself tomorrow. If you decide my weekly mailing is not for you, it's very easy to unsubscribe.


WHY AUTHORS WRITE BOOKS Authors write books for many reasons, but an important one is to connect with readers.  I made a most interesting connection this past week with Ramesh Prabhu, a professor of journalism from Bangalore, India. To hear about it from his perspective, check out his recent blog on the subject: goo.gl/NBavA.