WHY I DO WHAT I DO, or What a joy it is to be a journalist and a journalism teacher! 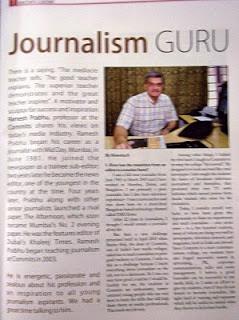 A few years ago, in May 2010 to be precise, I was interviewed for the "Teacher's Corner" section of the following month's issue of The Students' Mag, a monthly published from Bangalore. Here is the text of the Q&A:

I was a full-time journalist from June 1981 to March 2003 and I have worked in Mumbai, Dubai, and Bangalore. I am primarily a print journalist, but I also have television experience — I was a news anchor and chat show host on a short-lived Bangalore-based technology channel called TMG Enter.

After 22 years in journalism, I thought I would remain a journalist all my life.

But then a new challenge presented itself in April 2003 when Ranita Hirji, the dean of Commits, one of India’s best media institutes, asked me to teach journalism to post-grad students at the college. I refer to this as a challenge because I learnt my journalism on the job, not in a classroom. So I was not sure how good a teacher I would be. (A brief digression: In the late ’70s and early ’80s there were hardly any colleges offering journalism courses, so I only have an undergraduate science degree. It worked for me. But today media organisations look to hire only those who have the right qualifications, preferably a post-graduate degree.)

Luckily for me, the students at Commits are enthusiastic, career-oriented young people who are very keen to learn the skills that will help them to thrive as media professionals. That made my job easy.

Among other things, I helped the first batch I taught at Commits to revamp the college “lab journal” — we designed it to look and read like a real newspaper. I also taught the students the basics of television journalism and they then produced their own TV news bulletins which earned praise from media veterans who came for the evaluation.

Today, I consider myself very lucky to have been given this opportunity to share my experiences and teach journalism — over seven years — to a few hundred students, many of whom are doing very well in newspapers, television channels, and magazines, both in India and abroad. Since Commits is a mass communications college, our students have also forged successful careers in advertising, PR, corporate communications, radio, and event management. I believe a good journalist can be successful in any media field, so I make an effort to give my students, even if they do not intend to become journalists, the right kind of training and exposure which will be useful no matter what they choose to do in media.

I absolutely love what I do for many reasons. Every year I now get to interact with — and learn from — a fresh batch of students. I think I am a much better journalist today because my students keep me on my toes with their questions; in order to do a good job of the answers, I am constantly updating my knowledge base. Next, I love books, music, films — in fact, almost every form of popular culture — and it’s fascinating for me to be able to discuss all this with Gen Next. Also, our students have done us proud — they are our brand ambassadors and it’s exhilarating to see them on television and read their bylines and receive their telephone calls and emails describing all the good work they are doing.

I must add a few words here about how technology helps the faculty-student interaction. I use email to send my course material in advance so that the students can prepare for debate and discussion in my class. I also alert them via email to interesting articles and links (on weekends, I also send them jokes). I publish two blogs, The Commits Chronicle, which gives them updates on happenings at the college and on activities of the students, and The Reading Room, which provides links to articles that will help our students become better media professionals.

Facebook is a big help too — I use Facebook as a distance education tool with my status messages focusing mostly on something important in the books I read. I also upload pictures that my students may find interesting and I make sure every picture has an appropriate caption because caption-writing is a skill which I try to teach them in class too as part of the print journalism course. I have also tried to be a source of inspiration – when I participated in the Sunfeast World Run in Bangalore on May 23 to raise funds for an NGO called Dream A Dream, I used my FB status messages to keep everyone updated in the hope that at the right time in their lives my students will give serious thought to helping those less fortunate than they.

One last point re: Facebook. I never send “friend” requests to my students; I always accept a student’s “friend” request. My students know it’s okay to “de-friend” me for any reason — I am not going to feel bad, nor am I going to sit in judgment. And my profile picture is a photograph of me with my wife. Just in case.

I am annoyed when students don’t make an effort. One of the first things I tell every batch: “I will never judge you by the marks you score in my assignments; but I will judge you by the effort you make to learn, to improve, to be good professionals.” 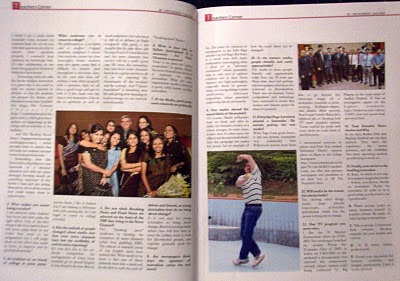 My philosophy as a journalist and a teacher: Engage, entertain, enlighten. I like to believe that everyone has a good time in my class. I know I do. Some students may not agree; some find it difficult to remain alert throughout a two-hour class — they did not have to do this as undergrads. I understand. So I wake up the sleepyheads gently with a question, then we all have a good laugh and get on with it. Also, I am curious (I call myself a Nosey Parker). I like to spar with my audience. I like to ask questions and I like to answer questions. I like to believe that I am making a difference in some small way. So I am eager to come to college every day, five days a week.

I wouldn’t go so far as to label news channels “entertainment channels”. Yes, there is that perception now because the cut-throat competition is driving the managements of some news channels to go to absurd lengths to stay ahead in the race. But we must remember that television is still in its infancy in India compared with print. I am hopeful that in time there will be some form of consolidation and the news channels that survive will be the really good ones. We must also remember that television news channels have done a great service to all of us by exposing the shenanigans of the crooked and the corrupt. And “Citizen Journalism” is breathing new life and giving new meaning to local coverage on our national news channels.

The “breaking news” syndrome is injuring the reputation of TV news channels rather than helping to grab TRPs. The editors at the top news channels — the English ones, at least — have realised this. The problem is that one of these news channels has to take a stand and be the first to curb the rash of “breaking news” flashes. But who will bell the cat?

There is no place for “yellow journalism” in media. Period. No news channel can survive if it depends on yellow journalism. What any news organisation needs to thrive is good, solid, honest, credible journalism.

It is not easy for young journalists to bring about change. But it is not impossible. One will first have to enter the system, study it, look for like-minded people, and, together, gradually push for change.

No. The place for opinions in newspapers is the Edit Page and the Op-Ed Page. But there is a trend now with many newspapers encouraging what I think of as “advocacy journalism” where journalists take to task not in OPINION columns but in their NEWS reports the high-and-mighty, especially those in government, for wrongdoing or plain inefficiency. Advocacy journalism, when practised judiciously, has its merits.

Of course. Because media influences how we think and what to think, for instance, society as a whole changes. In some cases, it takes time. In other cases, the effects can be seen much faster. Isn’t the campaign for justice for Jessica Lal, to take one instance, an example of how the social fabric has changed?

The media is more people-friendly and approachable today than, say, 30 years ago. Most cities then had perhaps two newspapers; television was restricted to Doordarshan. There was no internet. Today competition and technology have combined to ensure that readers and viewers cannot be taken for granted.

While Page 3 was good drama, it did not portray journalism very realistically. Few Bollywood movies have been able to go beyond the stereotype image of a newspaper journalist as jhola-carrying, Kolhapuri-slipper-clad idealist. If the journalist is a man, he has to have a beard. More recently, Ram Gopal Varma’s Rann did a slipshod job of showing how TV news channels operate. Varma stuffed his script with every cliché he could think of, and then more. Here’s my Facebook status message after all of us at the college went to watch the movie:

If you want to know which movie does a great job of portraying newspapers and journalists, here’s the film that will probably be on top of every senior journalist’s list: All The President’s Men.

Yes. Among other things, media helps provide important, actionable information which has the power to bring about change.

My life is full, and time is at a premium, so it is difficult to ensure that I never miss a particular TV programme. I like the 30 Minutes documentary show on CNN-IBN. Two weeks ago, I watched my student Priyali Sur (Commits Class of 2005) in action on CNN-IBN as she anchored a documentary that exposed the controversial cervical cancer vaccine trials being conducted by Big Pharma in the rural areas of Andhra Pradesh. It was an investigative report of the highest standards.

In my view, Barkha Dutt and Rajdeep Sardesai are our best anchors. They have the experience, the screen presence, and the credibility that many upcoming anchors are still trying to work on.

1. Read. As much as you can. Newspapers, magazines, books — fiction, non-fiction. Books on journalism. Books by journalists. In order to be a good writer, you first have to be a good reader.
2. Watch movies. Listen to music. Immerse yourself in popular culture. Be aware of what’s going on around you.
3. Talk to people. Understand their concerns. Develop empathy for your readers and viewers.
4. At all times, behave professionally.
5. Guard zealously your reputation for honesty, credibility, and integrity. Once it's lost, all is lost.


***
UPDATE (February 18, 2015): On journalism, Commits students, and the historic Commits-Network 18 tie-up — watch my brief speech at our annual seminar here.