THE NOTE I SENT OUT TO MY STUDENTS JUST NOW:

Hindustan Times is shutting down its Kolkata edition as well as its editions in Ranchi, Bhopal, and Indore. Details here.
One of the reasons could be a decline in circulation followed by a decrease in ad revenue.
Young people (including media students, some of whom get as much as Rs.5,000 a month as pocket money) refuse to pay as little as four or five rupees to buy a newspaper. Could this be the reason for a decline in circulation? 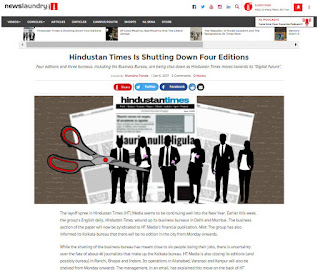 Death of a newspaper: Read this piece on The Hoot, which describes how HT's Bhopal edition was "slowly stifled before it was shut down earlier this week" — A requiem for the Hindustan Times, Bhopal.

There is already blood on the floor of one of the last bastions of print media in the world. Major national dailies are shutting editions, laying off staff, slashing costs, and freezing expansions and investments. Smaller papers have been doing this for the last five years. Worse is to come if taxes are raised under the GST regime, if the damaging two-month impact of demonetisation persists in this quarter and the next, and if the government does not at least part-discontinue the wage board.


That is an excerpt from a hard-hitting edit in The Times of India today. Read the column in its entirety here: Indian newspaper industry: Red ink splashed across the bottom line — Hard-hit by factors beyond its control, print media needs reasonable tax and labour policies.

WHY THE GUARDIAN WANTS YOU TO MAKE A CONTRIBUTION: 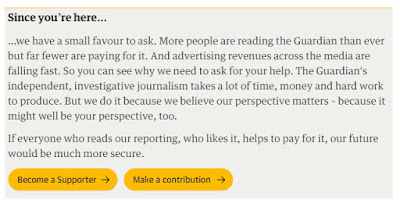