Media Matters-10: What to read, especially if you want to understand the media (Second and final part of a two-part series) 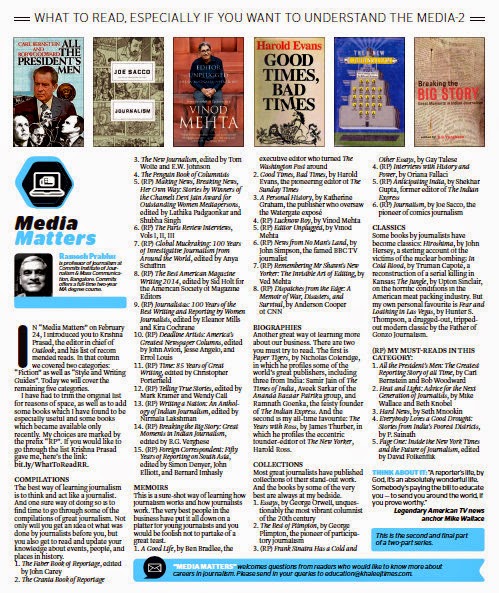 WHAT TO READ, ESPECIALLY IF YOU WANT TO UNDERSTAND THE MEDIA-2


In “Media Matters” on February 24, I introduced you to Krishna Prasad, the editor in chief of Outlook, and his list of recommended reads. In that column we covered two categories: “Fiction” as well as “Style and Writing Guides”. Today we will cover the remaining five categories.

I have had to trim the original list for reasons of space, as well as to add some books which I have found to be especially useful and some books which became available only recently. My choices are marked by the prefix “RP”. If you would like to go through the list Krishna Prasad gave me, here’s the link: What To Read.

COMPILATIONS
The best way of learning journalism is to think and act like a journalist. And one sure way of doing so is to find time to go through some of the compilations of great journalism. Not only will you get an idea of what was done by journalists before you, but you also get to read and update your knowledge about events, people, and places in history.

1. The Faber Book of Reportage, edited by John Carey
2. The Granta Book of Reportage
3. The New Journalism, edited by Tom Wolfe and E.W. Johnson
4. The Penguin Book of Columnists
5. (RP) Making News, Breaking News, Her Own Way: Stories by Winners of the Chameli Devi Jain Award for Outstanding Women Mediapersons, edited by Lathika Padgaonkar and Shubha Singh

MEMOIRS
This is a sure-shot way of learning how journalism works and how journalists work. The very best people in the business have put it all down on a platter for young journalists and you would be foolish not to partake of a great feast.

1. A Good Life, by Ben Bradlee, the executive editor who turned The Washington Post around
2. Good Times, Bad Times, by Harold Evans, the pioneering editor of The Sunday Times

3. A Personal History, by Katherine Graham, the publisher who oversaw the Watergate exposé
4. (RP) Lucknow Boy, by Vinod Mehta
5. (RP) Editor Unplugged, by Vinod Mehta
6. (RP) News from No Man’s Land, by John Simpson, the famed BBC TV journalist
7. (RP) Remembering Mr Shawn’s New Yorker: The Invisible Art of Editing, by Ved Mehta
8. (RP) Dispatches from the Edge: A Memoir of War, Disasters, and Survival, by Anderson Cooper of CNN

BIOGRAPHIES
Another great way of learning more about our business. There are two you must try to read. The first is Paper Tigers, by Nicholas Coleridge, in which he profiles some of the world’s great publishers, including three from India: Samir Jain of The Times of India, Aveek Sarkar of the Ananda Bazaar Patrika group, and Ramnath Goenka, the feisty founder of The Indian Express. And the second is my all-time favourite: The Years with Ross, by James Thurber, in which he profiles the eccentric founder-editor of The New Yorker, Harold Ross.

COLLECTIONS
Most great journalists have published collections of their stand-out work. And the books by some of the very best are always at my bedside.

1. Essays, by George Orwell, unquestionably the most vibrant columnist of the 20th century
2. The Best of Plimpton, by George Plimpton, the pioneer of participatory journalism
3. (RP) Frank Sinatra Has a Cold and Other Essays, by Gay Talese
4. (RP) Interviews with History and Power, by Oriana Fallaci
5. (RP) Anticipating India, by Shekhar Gupta, former editor of The Indian Express
6. (RP) Journalism, by Joe Sacco, the pioneer of comics journalism

CLASSICS
Some books by journalists have become classics: Hiroshima, by John Hersey, a sterling account of the victims of the nuclear bombing; In Cold Blood, by Truman Capote, a reconstruction of a serial killing in Kansas; The Jungle, by Upton Sinclair, on the horrific conditions in the American meat packing industry. But my own personal favourite is Fear and Loathing in Las Vegas, by Hunter S. Thompson, a drugged-out, tripped-out modern classic by the Father of Gonzo Journalism.

(RP) My must-reads in this category:
1. All the President’s Men: The Greatest Reporting Story of all Time, by Carl Bernstein and Bob Woodward
2. Heat and Light: Advice for the Next Generation of Journalists, by Mike Wallace and Beth Knobel
3. Hard News, by Seth Mnookin
4. Everybody Loves a Good Drought: Stories from India’s Poorest Districts, by P. Sainath
5. Page One: Inside the New York Times and the Future of Journalism, edited by David Folkenflik

THINK ABOUT IT: “A reporter's life, by God, it’s an absolutely wonderful life. Somebody’s paying the bill to educate you — to send you around the world, if you prove worthy.” — Legendary American TV news anchor Mike Wallace

·        Ramesh Prabhu is professor of journalism at Commits Institute of Journalism & Mass Communication, Bangalore. Commits offers a full-time two-year MA degree course.
·        “Media Matters” welcomes questions from readers who would like to know more about careers in journalism. Please send in your queries to education@khaleejtimes.com.