Media Matters-9: What to read, especially if you want to understand the media (First part of a two-part series) 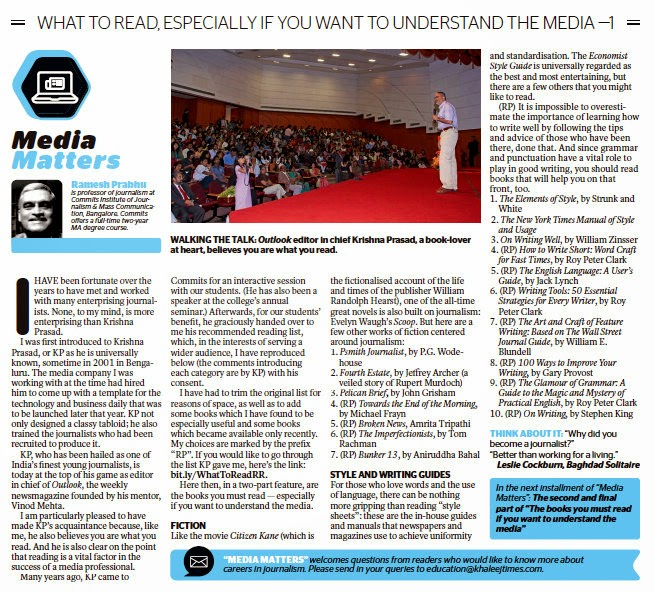 WHAT TO READ, ESPECIALLY IF YOU WANT TO UNDERSTAND THE MEDIA-I

I have been fortunate over the years to have met and worked with many enterprising journalists. None, to my mind, is more enterprising than Krishna Prasad.

I was first introduced to Krishna Prasad, or KP as he is universally known, sometime in 2001 in Bengaluru. The media company I was working with at the time had hired him to come up with a template for the technology and business daily that was to be launched later that year. KP not only designed a classy tabloid; he also trained the journalists who had been recruited to produce it.

KP, who has been hailed as one of India’s finest young journalists, is today at the top of his game as editor in chief of Outlook, the weekly newsmagazine founded by his mentor, Vinod Mehta.

I am particularly pleased to have made KP’s acquaintance because, like me, he also believes you are what you read. And he is also clear on the point that reading is a vital factor in the success of a media professional.

Many years ago, KP had come to Commits for an interactive session with our students. (He has also been a speaker at the college’s annual seminar.) Afterwards, for our students’ benefit, he graciously handed over to me his recommended reading list, which, in the interests of serving a wider audience, I have reproduced below (the comments introducing each category are by KP) with his consent.

I have had to trim the original list for reasons of space, as well as to add some books which I have found to be especially useful and some books which became available only recently. My choices are marked by the prefix “RP”. If you would like to go through the list KP gave me, here’s the link: What To Read.

Here then, in a two-part feature, are the books you must read – especially if you want to understand the media.

FICTION
Like the movie Citizen Kane (which is the fictionalised account of the life and times of the publisher William Randolph Hearst), one of the all-time great novels is also built on journalism: Evelyn Waugh’s Scoop. But here are a few other works of fiction centered around journalism:


STYLE AND WRITING GUIDES
For those who love words and the use of language,there can be nothing more gripping than reading “style sheets”: these are the in-house guides and manuals that newspapers and magazines use to achieve uniformity and standardisation. The Economist Style Guide is universally regarded as the best and most entertaining, but there are a few others that you might like to read.

(RP) It is impossible to overestimate the importance of learning how to write well by following the tips and advice of those who have been there, done that. And since grammar and punctuation have a vital role to play in good writing, you should read books that will help you on that front, too.

1. The Elements of Style, by Strunk and White
2. The New York Times Manual of Style and Usage
3. On Writing Well, by William Zinsser
4. (RP) How to Write Short: Word Craft for Fast Times, by Roy Peter Clark
5. (RP) The English Language: A User's Guide, by Jack Lynch
6. (RP) Writing Tools: 50 Essential Strategies for Every Writer, by Roy Peter Clark
7. (RP) The Art and Craft of Feature Writing: Based on The Wall Street Journal Guide, by William E. Blundell
8. (RP) 100 Ways to Improve Your Writing, by Gary Provost
9. (RP) The Glamour of Grammar: A Guide to the Magic and Mystery of Practical English, by Roy Peter Clark
10. (RP) On Writing, by Stephen King
THINK ABOUT IT: “Why did you become a journalist?”
“Better than working for a living.”
― Leslie Cockburn, Baghdad Solitaire


·        Ramesh Prabhu is professor of journalism at Commits Institute of Journalism & Mass Communication, Bangalore. Commits offers a full-time two-year MA degree course.
·        “Media Matters” welcomes questions from readers who would like to know more about careers in journalism. Please send in your queries to education@khaleejtimes.com.

On journalism, Commits students, and the historic Commits-Network 18 tie-up

My brief speech at Expressions 2015, the annual Commits seminar:


Posted by Ramesh Prabhu No comments: 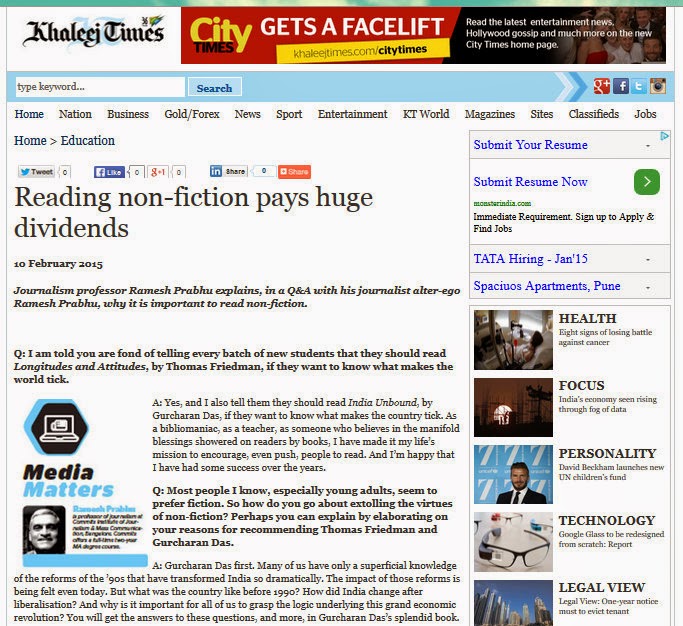 Journalism professor RAMESH PRABHU explains, in a Q&A with his journalist alter-ego RAMESH PRABHU, why it is important to read non-fiction.

Q: I am told you are fond of telling every batch of new students that they should read Longitudes and Attitudes, by Thomas Friedman, if they want to know what makes the world tick.

A: Yes, and I also tell them they should read India Unbound, by Gurcharan Das, if they want to know what makes the country tick. As a bibliomaniac, as a teacher, as someone who believes in the manifold blessings showered on readers by books, I have made it my life’s mission to encourage, even push, people to read. And I’m happy that I have had some success over the years.

Q: Most people I know, especially young adults, seem to prefer fiction. So how do you go about extolling the virtues of non-fiction? Perhaps you can explain by elaborating on your reasons for recommending Thomas Friedman and Gurcharan Das.

A: Gurcharan Das first. Many of us have only a superficial knowledge of the reforms of the ’90s that have transformed India so dramatically. The impact of those reforms is being felt even today. But what was the country like before 1990? How did India change after liberalisation? And why is it important for all of us to grasp the logic underlying this grand economic revolution? You will get the answers to these questions, and more, in Gurcharan Das’s splendid book.

Das, a former chief executive of Procter & Gamble India, has a unique insight into the country’s history. He also has a way with words, which makes India Unbound incomparable as an introduction to economics. Really, it is the equivalent of Economics 101.

So, knowing how young people shudder at the thought of an economics lesson and knowing how badly they need to understand the subject, I press them to read India Unbound closely.

Longitudes and Attitudes, on the other hand, offers readers a seat at the international table as Thomas Friedman, the Pulitzer Prize-winning New York Times columnist, serves up his sharp opinions on “the world in the age of terrorism” (the sub-title of his book, which is a collection of the columns he wrote for the Times). Friedman flies around the world to gather material for his twice-weekly articles, so we get reports — and horizon-widening views — from Riyadh and Moscow, Jakarta and Teheran. Who can say no to this choice cuisine? More to the point, who will want to say no?

Q: Going back to my original question, though, isn’t fiction a better choice? After all, novels transport us to a world that exists in the author’s imagination, and that world becomes ours, too, as we read on. What better way to escape from our humdrum lives!

A: Everyone who knows me knows how crazy I am about books. I have been reading books since I was five or six years old. And like everyone else, I began with fiction. So I know where you are coming from. I agree that novels offer us a way to experience many vicarious thrills. But non-fiction gives us a new perspective on our world as it exists. Reading non-fiction can help us become better persons. Non-fiction can give a boost to our careers.

A: You have apparently not heard of How Will You Measure Your Life? Or The Last Lecture. A Complaint-Free World. Letters to Sam. A Fistful of Rice. How Proust Can Change Your Life... I could go on. These are just a few of the many wonderful books that I have read in recent years that have not only made me think about my approach to life but have also been an inspiration. I wish these books had been around when I was growing up; they would have made such a big difference to my mindset at a stage in my life when change would have been more welcome, and easier, than it is today.

I would have been a better journalist and writer, too, if the books available to me now were available when I was beginning my career. The books I am thinking of are, again, just to mention a few, Remembering Mr. Shawn's New Yorker: The Invisible Art Of Editing; The Gang That Wouldn't Write Straight; Breaking the Big Story: Great Moments in Indian Journalism; Writers on Writing: Collected Essays from The New York Times; Essential English for Journalists, Editors, and Writers... there are so many extraordinary books in this category that I feel bad about not being able to name all of them.

Q: The way I look at it, you seem to be focused on what I think of as self-help books, and books that deal with journalism and writing. What about history, biography, memoir? And business books — they are all the rage today, I understand.

A: I’m glad you’ve brought this up. I am not really a big fan of “self-help” literature; I think of the books I have referred to as “wisdom literature”. I only chose those two sub-genres you mention because, as a teacher, I have found it easier to get young people started on non-fiction when they believe, rightly, that there is a possibility that the books concerned will have a bearing on their future.

But when it comes to non-fiction, I am an omnivore. Want to read a great book dealing with world history? I recommend highly Travels with Herodotus, by legendary Polish journalist Ryszard Kapuscinski, who began his career as a foreign correspondent in India. As for biographies, there is Art Spiegelman’s spellbinding Holocaust narrative, Maus (yes, it is a graphic novel, but who says non-fiction has to be wholly text-based?). Recently I also read Kitchen Confidential, by Anthony Bourdain — how a man can be both an amazing chef and a gifted writer with an eye for detail beats me.

I have read my share of business books, too — not too long ago, I thoroughly enjoyed reading Inside Drucker's Brain, billed as the most accessible guide to the essential ideas of Peter Drucker, the inventor of modern management.

Q: Clearly, there is a wealth of great non-fiction out there to suit all possible tastes.

A: Oh yes. So the sooner you get down to it, the better.

·        Ramesh Prabhu is professor of journalism at Commits Institute of Journalism & Mass Communication, Bangalore. Commits offers a full-time two-year MA degree course.
·        “Media Matters” welcomes questions from readers who would like to know more about careers in journalism. Please send in your queries to education@khaleejtimes.com.