This was published yesterday on the Education Page of Dubai's Khaleej Times:

WHAT YOU MUST DO
TO BECOME A JOURNALIST

When Shagorika Easwar wanted to work as a journalist in Dubai, she sent her CV to Khaleej Times. This was sometime in 1989. Shagorika’s CV landed on my desk because everyone knew that, as features editor of the newspaper, I was looking for a good hand.

Along with her CV, Shagorika had enclosed a copy of an article she had written. I don’t remember now what the piece was about but I can’t ever forget that one glance at it was enough to convince me that we had found our Ms Right. When you write like an angel, the world sits up and takes notice.

Shagorika joined Khaleej Times shortly afterwards and, until she immigrated to Canada with her family some years later, did the Features Department proud. She edited copy, sized pictures, laid out pages, came up with story ideas, wrote a few stories herself, developed good relationships with everyone from her fellow journalists to columnists to copy-setters and office drivers — all skills that she is putting to good use in Toronto as the editor of two highly successful magazines which she launched along with her husband.

It was easy for Shagorika to become a journalist because she has a recognisable and provable talent for writing. I don’t remember if I even asked her about her academic qualifications. Similarly, it was easy for me to become a journalist back in 1981 (see “Media Matters-2”) even though I did not have a degree in journalism or mass communication. (It is a different matter that two years ago, at the age of 54, I studied for and earned a master’s degree in journalism.)

In those days, the ’80s, there were very few educational institutions offering post-graduate programmes for media aspirants. Also, print was still king, with 24-hour television news channels nowhere on the horizon and the internet only a futuristic concept. So journalism, even though it was a highly respected profession, was not really considered to be a glamorous one and, consequently, the competition for jobs was not as intense as it is today.

What is the scene like now for those who want to become journalists? Media organisations are looking to hire only those who will be a good fit, so a post-graduate degree, or at least a post-graduate diploma, from a reputed institute is paramount. This is because, as I wrote in a magazine article last year, hundreds of television news channels and a few thousand newspapers and magazines are engaged in a race for both audiences and advertisers. The competition is so fierce that new recruits at the entry level no longer have any breathing space, unlike in the past.

No one at work has the time now to hold the newbie’s hand as he or she attempts to navigate the swiftly moving and often treacherous currents of the media ocean. There is no honeymoon period. There is no time for a honeymoon. Period.  That is why the industry today prefers to hire only those who have a master’s degree, or at least a post-graduate diploma, from an institute that has a reputation for providing quality journalism education.

So this much is clear: If you want to become a journalist, a good education comes first.


Now, how do you choose a good media college? Do extensive research. Study the course structure to assess the importance given to practical training. Find out as much as you can about the faculty: What are their qualifications to teach the course? How many years have they worked in the industry? Do they blog? Ask about industry tie-ups. Does the college arrange internships? Request contact details of alumni — if the college is a reputed one, the staff will be glad to answer all your questions and help you get a better grip on the course it offers.

For your part, if you are keen on becoming a journalist, make sure your decision is not based on a whim. Spend time talking with journalists. Try to understand what it means to be a journalist. And once you are sure journalism is what you want and after you have taken a decision on the college, give some thought to the advice I give all media aspirants:
THINK ABOUT IT: “I still believe that if your aim is to change the world, journalism is a more immediate short-term weapon.” — Tom Stoppard, English dramatist who has written for TV, radio, film, and stage. He co-wrote the screenplays for Brazil, The Russia House, and Shakespeare in Love, and has received one Academy Award and four Tony Awards
* IN THE PHOTOGRAPH: Commits alumni Dipankar Paul and Shikha Gaba-Paul, husband and wife, both from the Class of 2009, with their master's degree certificates 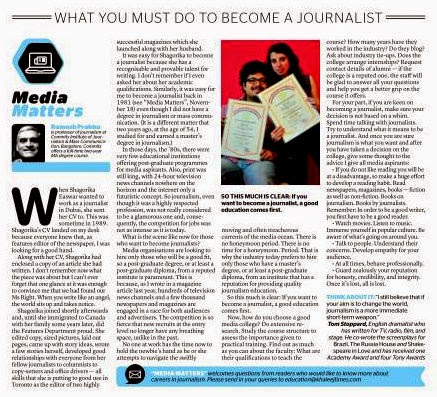 A LETTER TO THE EDITOR OF KHALEEJ TIMES:

I have read Ramesh Prabhu’s column Media Matters (December 2) with interest ever since it was launched a few weeks ago. What a great idea, I thought, a respected journalist and teacher writing about the profession, providing insight into what makes for good journalism. Imagine my astonishment at finding my name in the latest column! To say it brought back lovely memories would not be entirely correct — I have never forgotten the years I spent in Khaleej Times as a sub-editor, learning, working, and yes, forging friendships that remain strong to this day. 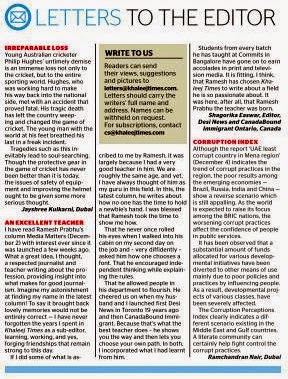 If I did some of what is ascribed to me by Ramesh, it was largely because I had a very good teacher in him. We are roughly the same age, and yet, I have always thought of him as my guru in this field. In this, the latest column, he writes about how no one has the time to hold a newbie’s hand. I was blessed that Ramesh took the time to show me how. That he never once rolled his eyes when I walked into his cabin on my second day on the job and — very diffidently — asked him how one chooses a font. That he encouraged independent thinking while explaining the rules. That he allowed people in his department to flourish. He cheered us on when my husband and I launched first Desi News in Toronto 19 years ago and then CanadaBound Immigrant. Because that’s what the best teacher does — he shows you the way and then lets you choose your own path. In both, I incorporated what I had learnt from him.

Students from every batch he has taught at Commits in Bangalore have gone on to earn accolades in print and television media. It is fitting, I think, that Ramesh has chosen Khaleej Times to write about a field he is so passionate about. It was here, after all, that Ramesh Prabhu the teacher was born.