Last month I received an e-mail from Commitscion Deep Pal (Class of 2003), who has been an anchor with CNBC Awaaz as well as with Times Now and who is now a foreign policy analyst in Washington, D.C. The e-mail concerned a story that had appeared in The Indian Express on September 7 with the headline "Is sexism in the 24×7 news channels a reality?"

Deep wanted to know my views on the piece and he also wanted me to pass on the link to his juniors. 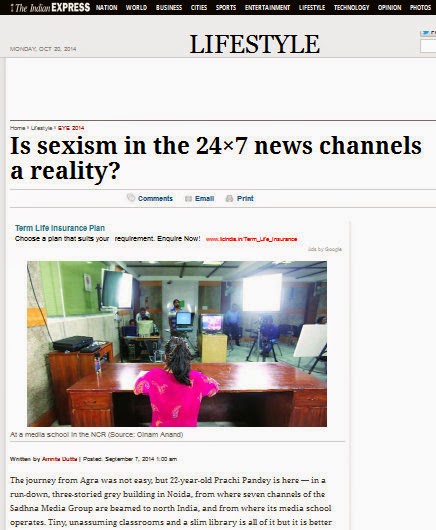 From what I had observed during my brief stint as an intern at CNN-IBN in Noida, there were no visible incidents of  discrimination against women or even pushing them to extreme limits to make them look more agreeable in front of the camera. Anchors such as Anubha Bhosle and former anchor Sagarika Ghose are not skinny but they are excellent anchors. They have always managed to attract and retain their viewers by the force of their personalities, and not just by their looks.

Women journalists at CNN-IBN were always treated politely and respectfully and, irrespective of gender, if someone had a good idea, they were always encouraged to go forward with it.
(Ankita Sengupta is a reporter/sub-editor with Asian Age in Mumbai.)


I believe television is a shallow industry and that is the case around the world. I cannot claim to know the truth about Hindi and regional language newsrooms, never having worked in one. But English newsrooms tend to have a blend of both extremes. As an anchor with a decade's experience I have been told to lose weight, seek help to improve my skin, colour my hair to hide the grey and so on. I have witnessed instances of other young ladies being told to use their looks as an asset on the field, events where female anchors are asked to usher and look after corporate guests (a request that is not made of male anchors). The interesting thing is that these requests are not all made by male seniors. In several cases it was a female boss who would bring these things up.

On television, I believe, your face is part of your job. And it is the anchors' responsibility to look their best. I also know of several several women (myself included) who clawed their way in and established themselves as anchors without being conventionally good-looking. It is an uphill, daily battle but we have made progress.

Newsrooms today are managed by old boys' clubs but middle management and the floor is dominated by women. It is only a matter of time before these women rise to the corner offices; it is only a question of keeping up the fight!
(Faye D'Souza is editor, personal finance, with ET Now in Mumbai.)

As for my views on media education, which was one of the themes in the Indian Express article, I asked Deep to study the piece I had written for a Pune-based magazine last year. It's all there, I told him:

Media education: From course structure to quality of students, the challenges are immense

Is sexism in the 24×7 news channels a reality?
Posted by Ramesh Prabhu