Insanely funny, and still able to drive us crazy with laughter after all these years

There may be a surfeit of synonyms for mad in any decent thesaurus, but I doubt they will be anywhere near enough to describe the contents of MAD, the magazine many of us old fogies first discovered as teenagers.

Today, having recently stumbled upon the MAD website, I am back to chortling over the antics of Don Martin's seriously unhinged characters... 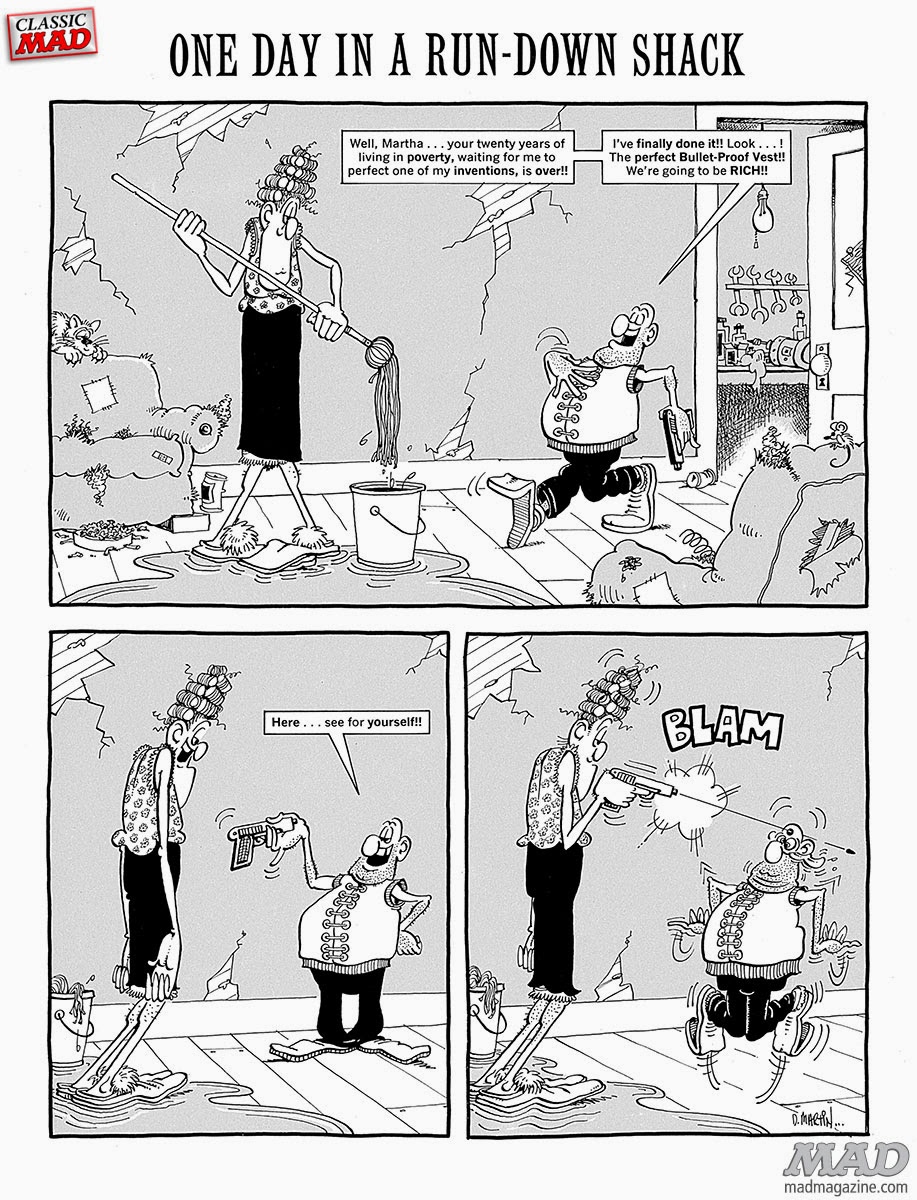 ...chuckling over the ding-dong battles of the screwy (and mute) spies created by Cuban refugee Antonio Prohías in 1960 and currently being drawn by Peter Kuper... 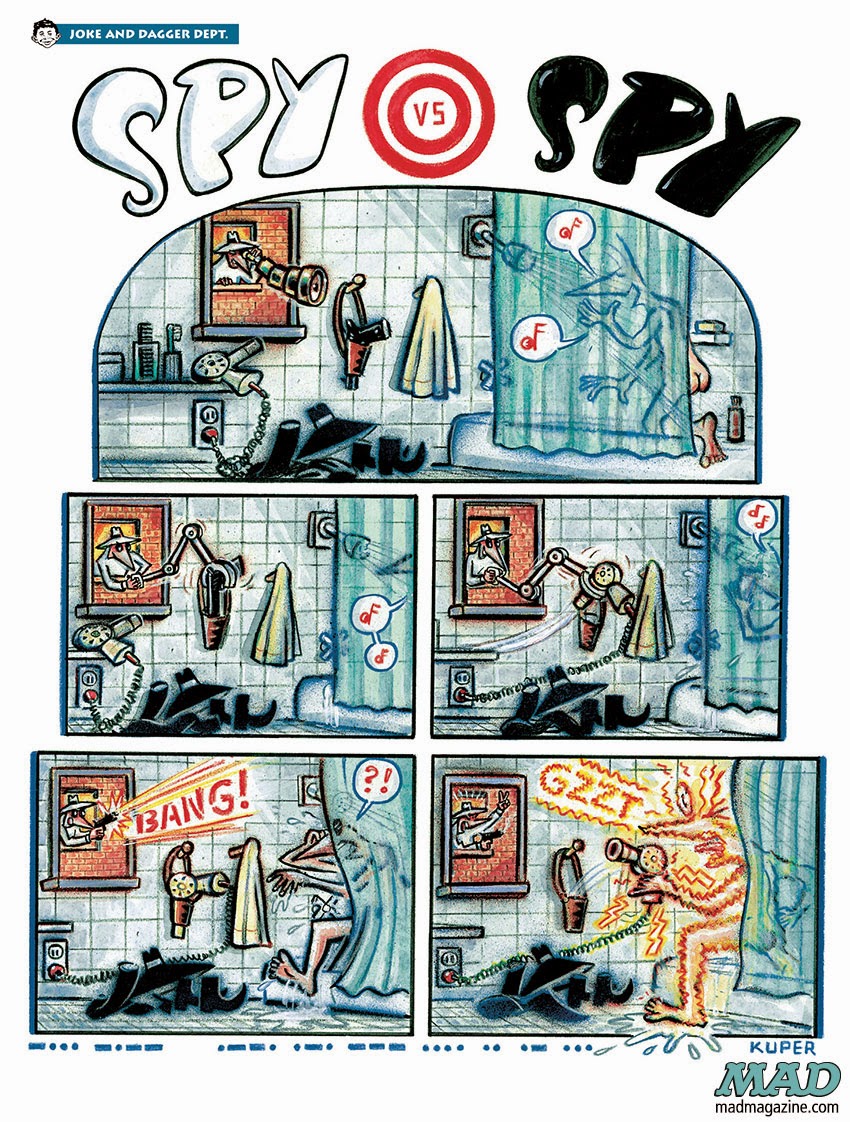 ...cackling at the frenzied stunts of Sergio Aragonés's "Shadows"... 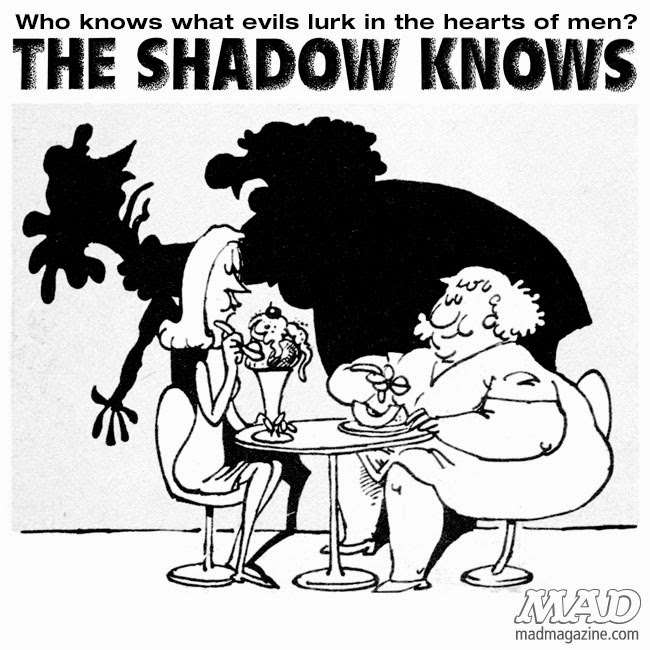 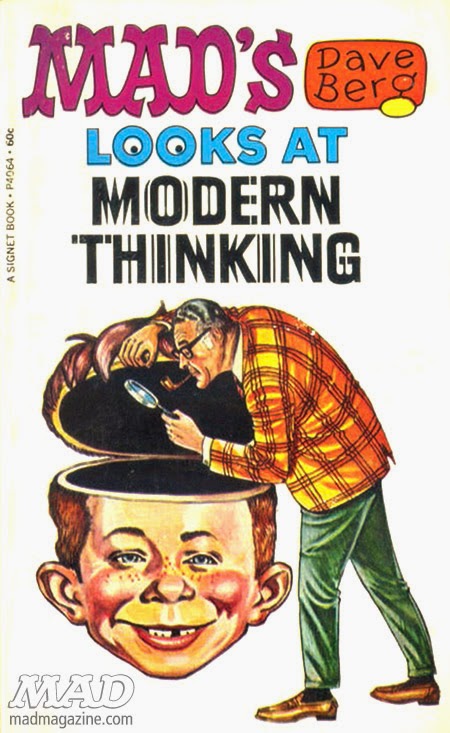 Oh, there's more, so much more to enjoy on Classic MAD!
Remembering MAD Magazine’s ‘Maddest Artist’ Don Martin On The 13th Anniversary Of His Passing

How's this for an incomparable example of the famed British stiff upper lip?

The original idea behind Lunch with the FT was to rediscover the art of conversation in a convivial setting. Good food was essential, preferably washed down with a decent bottle of wine to elicit insights and the occasional indiscretion.

The combination led to some memorable encounters, notably a liquid lunch of biblical proportions at the Cafe Royal between Nigel Spivey, a Cambridge don and freelance FT writer, and Gavin Ewart, the 79-year-old poet.

The next day, Spivey received a call from Mrs Ewart, saying that her husband had returned home happier than she had seen him in a long time. "The second [thing] — and you are not to feel bad about this — is that he died this morning."

— Financial Times editor Lionel Barber, in his introduction to
Lunch with the FT: 52 Classic Interviews, which he edited

If you want to become a journalist, the least you can do is read newspapers and magazines. Here's why:

I have reluctantly come to the conclusion that I must "understand" why young people are reluctant to read newspapers and magazines. (There's one theory about this phenomenon that you can read here; and here's another, this one written by a journalism teacher.)

But if some young people say they want to become journalists, and they refuse to read newspapers and magazines — well, that I don't understand (no need for finger quotes here).

In the first place, if they are serious about journalism, they need to be aware of what's going on in the world around them.

Second, they need to read closely so as to absorb writing styles.

Third, only by reading newspapers and magazines will they understand the issues that affect readers; this is how they will develop empathy for readers, which will help them ask the right questions when they are doing their own research as journalists. This applies also to those who say they want to become television journalists, who, by the way, often get good story ideas from reading newspapers.

(And if you want to be a good television journalist, you will have to understand the "how" and the "why" of a story before you report the "who, what, when". It is newspapers and magazines, more than TV news programmes, that help us understand the "how" and the "why", in addition to helping us answer two other key questions: "So what?" and "What next?" I certainly can't see "news alerts" on our smartphones going beyond answering "who, what, when".)

There is another important factor to consider: If they don't read what other journalists are writing, how can they expect people to read what they themselves will be writing when they become journalists?

Here's something else that should really give them pause for thought: If they and people from their generation do not read newspapers and magazines, then the future of these publications is bleak. Falling sales will result in falling advertising revenue. Where will newspapers and magazines get the money for news-gathering, which is a very expensive process?

And here's the kicker: Where will newspapers and magazines get the money to pay THEM?
OTHER MUST-READS:

EXPLODING STEREOTYPES: A Commits alumna (and mother of a two-year-old boy) shows the way...

...in exactly 454 words. This is classy writing on a touchy subject.
Classy because she does this with such style that she stands out as an unusual young person in a world where there are few standouts.

But classy or not, touchy or not, what she has written deserves much wider coverage and so...


There are so many people talking about bringing up girls. Raise them strong, raise them independent, teach them to play with trucks, don’t read fairy tales to them, throw away the Barbies, learn to throw a punch.
‘You don’t need rescuing, my baby.’
‘You can be anything you want to be.’
‘My girl is not at all girly, she loves her carpenter tools.’
‘How dare he buy her a kitchen set!’
Well, I want that abandoned kitchen set. For my son. I think it’s wonderful that he loves the world of food. How he loves his cousin's shiny shoes and wants the butterfly hair clip she has on her pretty head.

I want people to talk about raising sons as daughters. To stop saying ‘be a man’. To let them shriek with the girls, and want their purple tutus. They are going to be chasing skirts in a few years, why not wear one now?

My boy loves to wear pretty beaded chains. And I am always asked if I wanted a girl and if that’s why I let him wear the pink beaded chain for as long as he wants to. Yes, that’s exactly what it is, you genius waste of space. I wonder if mums of daughters are asked the same when their babies are in a pair of jeans instead of frilly skirts playing in the dirt with their trucks.

Why wouldn’t you let your son cry when he gets hurt? Why is hanging on to mamma’s leg such a bad thing for a boy? I am all for fist fights and dirt puddles, but is it so bad that he let the girl beat him up in school? He has probably already figured out that’s how you get the girls.

He’s only 2. And he doesn’t realise he’s being judged for a string of pink beads. But it works out, because at all of 2 he can cook and eat his silly version of peas and buttons rice in a real rice cooker, because nobody let me buy him that darned kitchen set.

“THE COOLEST SUPERMOM I KNOW”
Here are some of the comments Sanaa's post attracted on Facebook last week:
Posted by Ramesh Prabhu No comments:

Bloomberg Businessweek is ostensibly a publication meant for a business audience, but I have found in almost every issue a plethora of interesting and well-written features that can be appreciated and enjoyed by the general public too — here's one and here's another.

Many months ago the magazine changed certain aspects of the design and layout and began including a snippet of a column on how the cover gets made. Called "Cover Trail", the column gives us a little bit of insight into the workings of the minds of those who decide what the reader gets to see up-front. Far from being a banal discussion, the content of "Cover Trail" is often both intelligent and witty at the same time.

HOW THE COVER GETS MADE

"We need the world, with lots of arrows pointing to the world's trouble spots, areas that cause concern for American foreign policy."

"So, off the top of my head: Venezuela, Ukraine, Syria, North Korea, Palestine, Israel, Congo, Iraq, Afghanistan. There are more, you know. A lot more."

"Could we just highlight areas of the world that aren't problematic for American foreign policy?"

"So just one big arrow pointing to moose people in Canada?"

"Don't joke about Canada or its mooses. Her frosty attitude is a constant source of strength to me in these long days of winter."

"Yeah. Me, too. By the way — do you ever get the feeling that the world's problems never want to be solved and we're all just in a self-supporting cycle of persistent delusion, enabled by a narcissistic impulse to impose incompatible ideologies on our neighbors for a type of political gamesmanship that no one believes in anymore? Our leaders all acting under some imagined oppositional moral pretense when all..." 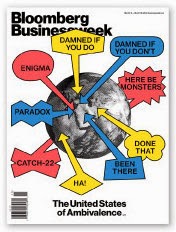 Incidentally, Commitscion David George (Class of 2005) is deputy editor of the Middle East edition of Bloomberg Businessweek. He has promised to give us his input on how his edition puts the cover together.

Speaking of covers, production journalists can learn a lot from reading the views of Fortune India editor D.N. Mukerjea on why good ideas and good writing need to be backed up by good design. And here's New York Times editor Bill Keller explaining how one of the world's great newspapers chooses stories for Page 1. Another good read!

In the crusade against ignorance, every weapon counts


ALSO READ: "Why you must read"
Posted by Ramesh Prabhu No comments:

You have just begun earning a salary. How do you make the best use of the money you are making?

Vivina Vishwanathan, writing in Mint this week,shows first-time wage-earners how to make the best use of their salaries. Here is her seven-point list:
Each point is explained in detail in the article. Check it out here: "Make the best use of your initial salaries".

PS: If I had had the luck to come upon such a list when I first began working in 1981, I wouldn't have had to wait till I got married in 1984 and my wife took our money matters in hand before I could begin pointing to a reasonable bank balance. Ultimately it is only because of her financial acumen that we were able to put together a decent nest egg.