Why you can't believe everything you read on Wikipedia 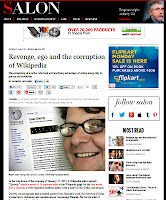 Who is "Qworty"? Why was he making revenge edits on Wikipedia? And how did he get away with it?

If you are a Wikipedia user, Andrew Leonard's exhaustively researched and brilliantly written piece in Salon will give you the shivers:

Qworty is just one of thousands of Wikipedia editors. He is surely not representative of the mainstream. But just as surely, there are others like him, working out their own agendas under cover of assumed identities. We just don’t know. Nobody knows. Nobody watches everything that happens on Wikipedia; nobody can watch everything that happens. But Qworty’s example tells us that even when people call attention to a rogue editor, even when that editor’s temper tantrums come to the attention of the founder of Wikipedia, it’s quite possible that no action will be taken.


Read Leonard's article in its entirety here: "Revenge, ego and the corruption of Wikipedia".
Posted by Ramesh Prabhu