Quotes from books, quotes by writers... to inspire, influence, and induce a new way of thinking-2

This was published in the April-May 2013 issue of Books & More magazine: 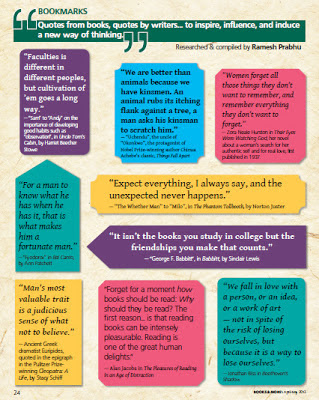 Quotes from books, quotes by writers... to inspire, influence, and induce a new way of thinking/RESEARCHED AND COMPILED BY RAMESH PRABHU

“Expect everything, I always say, and the unexpected never happens.”

— "The Whether Man" to "Milo", in The Phantom Tollbooth, by Norton Juster

*
“Faculties is different in different peoples, but cultivation of 'em goes a long way.”
— "Sam" to "Andy" on the importance of developing good habits such as "observation", in Uncle Tom's Cabin, by Harriet Beecher Stowe

*
“It isn't the books you study in college but the friendships you make that counts.”
— "George F. Babbitt", in Babbitt, by Sinclair Lewis

*
“For a man to know what he has when he has it, that is what makes him a fortunate man.”
— "Fyodorov" in Bel Canto, by Ann Patchett

*
“We are better than animals because we have kinsmen. An animal rubs its itching flank against a tree, a man asks his kinsman to scratch him.”
— "Uchendu", the uncle of "Okonkwo", the protagonist of Nobel Prize-winning author Chinua Achebe's classic, Things Fall Apart

*
“Man's most valuable trait is a judicious sense of what not to believe.”
— Ancient Greek dramatist Euripides, quoted in the epigraph in the Pulitzer Prize-winning Cleopatra: A Life, by Stacy Schiff

*
“Women forget all those things they don't want to remember, and remember everything they don't want to forget.”
— Zora Neale Hurston in Their Eyes Were Watching God, her novel about a woman's search for her authentic self and for real love, first published in 1937

*
“Forget for a moment how books should be read: Why should they be read? The first reason ... is that reading books can be intensely pleasurable. Reading is one of the great human delights.”
— Alan Jacobs in The Pleasures of Reading in an Age of Distraction

*
“We fall in love with a person, or an idea, or a work of art — not in spite of the risk of losing ourselves, but because it is a way to lose ourselves.”
— Jonathan Biss in Beethoven's Shadow