Another work of art from the pioneer of comics journalism

Earlier this year, in February, I had published a post on the pioneer of comics journalism, Joe Sacco, the man who has proved — literally — that journalism is an art form. Subsequently, I purchased, for the Commits library, two of his books: Palestine and Footnotes in Gaza.

Let me reiterate here what I have written in my post: There's no journalist I know or have heard of like Joe Sacco and there's no reportage I have seen or read that is like Sacco's astounding graphic representation of the human condition.

After reading both Palestine and Footnotes in Gaza, I became impatient to lay my hands on his magnum opus, Journalism, which was to be published later in the year. As soon as the book became available on Flipkart, which was last month, I bought a copy, which I am reading avidly now and which I'll place later in the college library. (Indian readers will not want to miss the section on the untouchable community of Musahars in eastern Uttar Pradesh.) 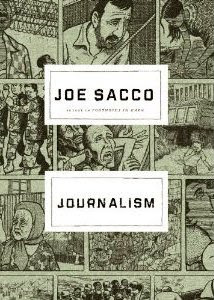 Coincidentally, DNA, whose magazine section yesterday was devoted to books, had a major piece on Journalism. "In an era of screaming reportage whose shelf life is less than 24 hours," Amruta Patil wrote in her review, "Sacco is dogged in his commitment to 'slow journalism', that rare art of allowing insight to percolate over time through carefully observed stories."

And buy your own copy of Journalism on Flipkart here for only Rs.380 (24% off). Believe me, it's a steal at that price.

The way you arrange your books says something about you, doesn't it?

Of all our newspapers, only Mint Lounge has the gumption, as far as I know, to devote a whole issue to reading. And only Aakar Patel, one of our finest journalists and my favourite Mint Lounge columnist, has the cerebral wherewithal to write a delightful column on the topic of how to shelve your books.

"Classifying one’s books," Patel writes, "is not done to arrange them in some cosy intellectual order. The point is to be able to find a volume when it is required, and to know what books you have on a particular subject."

I feel about this because I have spent considerable time developing a system which achieves these two ends.


And then Patel, who owns 5,000 books, proceeds to elaborate on his classification system:


Bibliophiles will especially love, and identify with, what Patel writes in the penultimate paragraph:

Few things are as pleasurable to me as opening a package of new books in the mail. Living amid them is very heaven. Perhaps expensive paintings are also like that, but I doubt it. All of your other possessions, your cars and watches and homes, are about how the world sees you. Your books influence how you see the world.