You used to be my type!

Back in the early '80s, when I first began my career as a journalist, computers were only a figment of an overactive imagination. We produced newspapers the old-fashioned way then, with typewriters, pens and pencils, rulers, and... typesetting machines.

I was reminded, when flipping through an old Outlook issue, of those now-ancient days (the bad ol' days I call them because I much prefer the new technology that made the production journalist's job so much easier).

So what did this typesetting machine look like? Here is a wonderfully evocative picture from that issue of Outlook by world-renowned photographer Pablo Bartholomew: 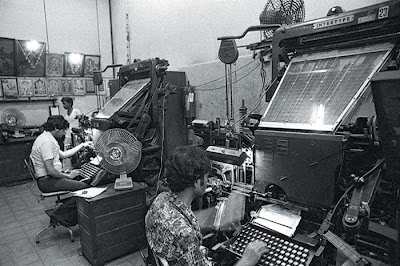 Bartholomew writes in the brief accompanying piece that, as a young lad, he used to visit various newspaper offices to drop off his father's copy — Bartholomew Senior was an art critic and also a photographer. A newspaper office then, says Bartholomew, resembled a chaotic circus, involving huge manpower and activity. The write-up continues:

The building was divided into separate floors, the editorial offices high above abuzz with the clank of typewriters, the lead type being set down below, while further down would be the printing press with ink and grease all over the floor, bales of newsprint being unloaded, all with their peculiar smells and sounds. Waves of activity took place as the printed pages of the newspaper, bound for different editions and locations, were manually assembled, bundled into trucks to be driven all night, and to railway stations and airports, to meet our breakfast tea.


The Mid Day office of the early '80s in Tardeo, Mumbai, came instantly to mind when I read that paragraph. Except for the fact that Mid Day was an afternoon newspaper and the printed copies were rushed out to locations nearby and distant in the daytime, everything was as Bartholomew describes it.
PS: In 1985, I quit Mid Day along with like-minded colleagues, led by the one and only Behram "Busybee" Contractor, to launch a rival paper called The Afternoon Despatch & Courier. ADC, as it used to be known, is still the newspaper closest to my heart.