"We are educating people out of their creativity"

I am mighty obliged to Commitscion Natasha Rego (Class of 2014) for introducing me to Ken Robinson's concept-shattering talks at TED.

In an e-mail she wrote to me yesterday — we had been discussing careers and the importance of being passionate about work — Natasha brought up Ken Robinson and told me that one of her favourite parts of the speech Sir Ken gave in February 2010 concerned his reference to people who love what they do. Here is what he said:


I meet all kinds of people who don't enjoy what they do. They simply go through their lives getting on with it. They get no great pleasure from what they do. They endure it rather than enjoy it and wait for the weekend. But I also meet people who love what they do and couldn't imagine doing anything else. If you said to them, "Don't do this anymore," they'd wonder what you were talking about. Because it isn't what they do, it's who they are.


Two years ago, I had published a post on this very subject: "If you love what you do, is it 'work'?". As you can imagine, I am thrilled to learn that a sentiment I have been expressing for years now is shared by a man considered by many to be one of the world's foremost experts on creativity. 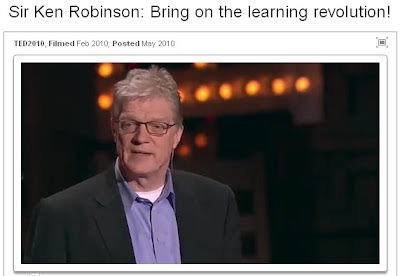 Sir Ken is also of the view that the approach to educating children is all wrong. He argues we're educated to become good workers, rather than creative thinkers. Students with restless minds and bodies — far from being cultivated for their energy and curiosity — are ignored or even stigmatised, with terrible consequences. "We are educating people out of their creativity," Robinson says. (Check out his TED profile — there are more quotes as well as links to his talks.)

I have an issue with the education system, too, though my problem is more to do with the decline in standards of the English language used by youngsters. And I have given vent to my feelings in a post I published in October 2010: "What's the point of an education if you remain illiterate?"

Be that as it may, in the TED talk Natasha has referred to, Sir Ken makes many valid points — intelligently, wittily — about the urgent need to reform the education system. Watch him deliver his brilliant speech here: "Bring on the learning revolution!"
Posted by Ramesh Prabhu