For PR professionals, life is a pitch

And that's why public relations execs (and journalists) will want to read a New York Times columnist's views on what makes a perfect pitch. According to David Pogue, whose recent column about "pitching" is one of the most popular ever on the PR Daily blog, the first job is getting your message across. Which is not easy because this is a business where "50 pitches a day land in journalists’ in-boxes". So how does yours stand out? Pogue gives us a few pointers while handing out his Perfect Pitch Awards:

On the other hand, sometimes the pitches are so wonderful, so delightful, you can’t resist. Here are this year’s winners of the Pogue Perfect Pitch award — pitches so clever, so persuasive, I’m going to wind up reviewing both of the products they’re pitching.

First, a YouTube video made by the employees of a company called CodeWeavers. They have a new program called CrossOver Impersonator that lets you run certain Windows programs on a Mac — without having to own a copy of Windows.


Pogue then gives us details of this pitch. And, afterwards, moves on to the next award:


The second Pogue Perfect Pitch award goes to Nikon. See, in my blog, I’d written a review of the Canon S95 in the form of a love letter. (“Dear Canon S95, I don’t often write love letters to gadgets. But you — you’re something special. Truth is, I’ve been searching for someone like you for years…”) To my surprise, I received a response “from” the Nikon D80, the first camera I ever really loved in print, a couple of years ago.


If you're a PR professional, read up on these two pitches to get an insight into how some innovative thinking (and writing) can help you get your client into the newspapers. You may also like to read a young PR pro's comments on David Pogue's column: "Perfect PR pitches: New York Times tech columnist picks his favorites".

Homai Vyarawalla's pictures, currently on display at Bangalore's National Gallery of Modern Art, and her storied career are an inspiration to news photographers everywhere. As film director Shyam Benegal says in a review he wrote for Outlook back in 2006 — he was commenting on the just-released Camera Chronicles of Homai Vyarawalla — her professional career spanned three of the most decisive and crucial decades in India's 20th-century history: 1940 to 1970.


In these 30 years, Homai lived in Delhi mainly photographing the political elite and their activities as a press photographer. She may not have been aware at the time that her work would become an important visual testimony of India's transition from a colonised country to the Indian nation and its travails over the next quarter of a century.


The book also contains anecdotes about Vyarawalla's encounters with the powerful and the famous. Here is another excerpt from Benegal's review:


Homai was not only the first but the only woman photojournalist in this entire period when press photography was considered an exclusively male domain. Not equipped with either a telephoto or a wideangle lens, she had to be either extremely close to her subjects or go great distances and heights to get composite shots. At one of Jinnah's last press conferences before Partition, she decided to get top angle shots from atop wooden packing cases stacked up in a corner of the room.  The packing cases gave way and she came tumbling down at the feet of Jinnah. His bemused response was, "I hope you are not hurt."


When Vyarawalla came to Bangalore earlier this week for the exhibition of her photographs at the National Gallery, Commitscion Raagamayi Rajsekhar (Class of 2011), who is working as a photographer with Bangalore Beat, rushed to meet her.


Raagamayi, whose ambition is to be a top-notch news photographer, says seeing Vyarawalla in the flesh and talking with her was a privilege. Raagamayi wrote in an e-mail today:


What differentiates her work from that of others, I think, is her brilliant composition. Imagine the situation in Vyarawalla's time: grappling with those heavy cameras, running around taking photographs while wearing a neatly draped saree, and having to make do without the innumerable editing programs now available to us.

No doubt DSL cameras are important because we need to send the pictures across to our publications immediately, but in the process we miss out on learning the finer aspects of photography. For example, we readjust the settings if our photographs are over- or under-exposed, but photographers of Vyarawalla's generation, who used film, had to know the exact camera settings for every situation.


The fact that Vyarawalla hails from Baroda, as does Raagamayi, "has been even more of a boost". Meeting this venerable pioneer was "a great, great, great inspiration", concludes Raagamayi.

GOOGLE PAYS TRIBUTE
UPDATE (December 9, 2017): Google paid tribute to Homai Vyarawalla on what would have been her 104th birthday by making her the subject of today's Google Doodle (see image below).

ALSO READ...
...in The Hindu: Who is Homai Vyarawalla featured in today's Google Doodle?

For a few hours on Monday, visitors to the Times of India website were greeted by this article on the killing of Osama bin Laden:


Someone, possibly a reader, alerted the newspaper to the goof-up and the headline was later corrected to read "Bin Laden was found with youngest wife".

Still on headlines: A few readers must have done a double take when they saw this one in DNA yesterday: 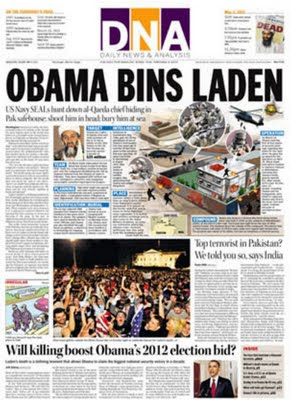 Unlike the ToI sub, the DNA sub who came up with this headline was probably getting a few pats on the back for his clever wordplay.

As long as we are on the subject of Bin Laden, did you know that the New York Times used to refer to him as "Mr bin Laden" on second reference, as dictated by house style, up until he was shot and his body buried at sea? Slate contributor Stayton Bonner, who explains in his piece titled "Goodbye, Mr Terrorist" how the NYT decided to strip Osama bin Laden of his honorific, says that according to the Times, dropping his title was a last-minute decision of minor importance, made just before going to press. "But," writes Bonner, "the decision does seem to imply some form of moral judgment."

Bin Laden is certainly a historical figure — defined as someone who will be talked about for decades — so he would have gotten the one-name treatment at some point either way. But why now? If George H.W. Bush died tomorrow, he would undoubtedly be referred to as "Mr. Bush." Idi Amin was sent off as "Mr. Amin," and Joseph Stalin was "Mr. Stalin." The Times' decision to forgo any transition period and jump straight to "bin Laden" indicates it had no fears about offending readers by shortening his name.
As such, Bin Laden joins a select crew of name-shortened Times evil-doers. Adolf Hitler was called "Hitler" even while still alive. The same went for fellow Nazis like Erwin Rommel. [Cambodian dictator] Pol Pot went without a courtesy title in his 1998 obituary.

Well, we have certainly learnt something here about house style, haven't we?

One last item: Who are the SEALs who took out Osama? Slate provides a glimpse into this top secret force: "No bark, all bite".
Posted by Ramesh Prabhu No comments:

Writing: It's best to keep the basics in mind — because the basics will always be the best

This will not come as news to those who live to write. But it is clear now that whether you're a journalist or a PR professional, whether you work in corporate communications or in advertising, whether you are self-employed or still a student, the basics of writing good English apply across all sectors and situations.

Take, for example, this insightful article on Forbes.com. Insisting that everyone needs to write intelligently, Helen Coster offers ten tips for better business writing. You will realise, when you read the article, that these tips can help in all kinds of writing.

Almost at the beginning, we learn...

Start by using short, declarative sentences. Never use a long word where a short one will do. (No need to write "utilize" when "use" works just as well.) Be ruthless about self-editing; if you don't need a word, cut it.

There is also some advice that is meant to be applied when writing professional emails but which will also give avid Facebookers pause for thought:

Curb your enthusiasm. Avoid overusing exclamation points, regardless of how energized or friendly you might feel. Choose professional sign-offs like "Best" and "Regards" over the too-cute "xoxo."

Commitscions will surely recall these next few rules from journalism class:

Whenever possible, use active verbs instead of passive verbs. ...
Beware of common grammatical mistakes, like subject-verb agreement. ...
Know when to use "that" and "which." ...
Another common error is confusing "affect" and "effect." ...

And the article ends with the useful recommendation to consult classic books on writing and grammar, such as The Elements of Style, by William Strunk and E.B. White.

Helen Coster and Forbes have just vindicated my belief that if you want to write well, you should know your basics.